In February of 2019, The Predictive Index® surveyed 3,000 employees across 20 industries to understand which factors had the greatest impact on employee engagement and turnover. Their answers paint a picture of the current state of engagement in the U.S. They also unveil how companies can get the most out of their people and retain top talent.

When employees are engaged, companies win financially. One Best Buy store quantified the annual value a 0.1% increase in engagement: $100,000. On the other hand, disengaged employees drain the coffers: Companies with engaged workers grew their earnings per share 27.8% over 12 months, while low engagement companies experienced an 11.2% decline in earnings per share over the same period, according to Towers Perrin.

Findings are broken down into five sections:

The state of employee engagement in 2019

In the U.S., the composite engagement rate is 71%.

To begin, the study offers a birds-eye view of overall employee engagement. The panel of 3,000 workers rated the following four engagement items on a scale of 1 (strongly disagree) to 5 (strongly agree).

The results depict a more engaged workforce than some accounts would have you believe—but there’s still much room for improvement. 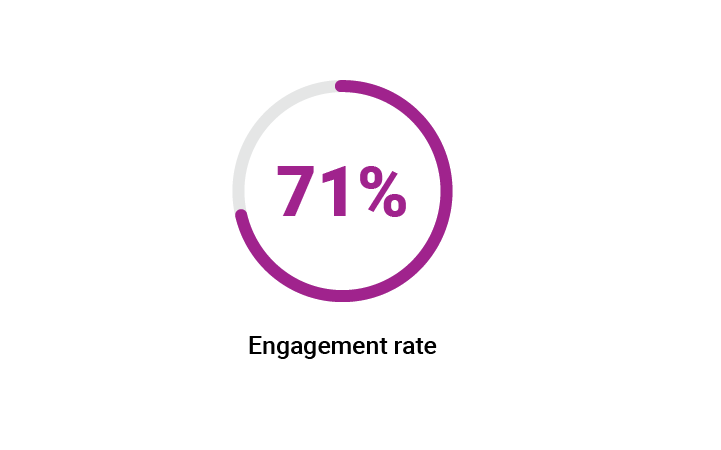 How is employee disengagement affecting your bottom line? 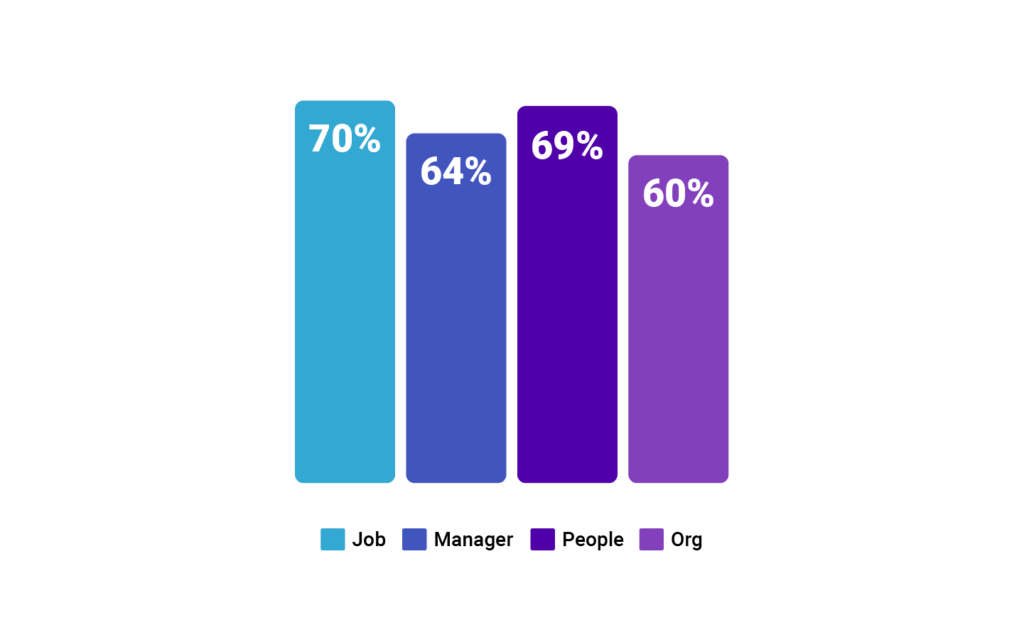 With overall engagement measured at 71%, the study dove a bit deeper. The panel of 3,000 workers rated a list of 54 items spanning four categories:

Respondents rated each item on a scale of 1 (strongly disagree) to 5 (strongly agree). About 70% of respondents enjoy their job, 69% like their co-workers, 64% feel favorably about their direct manager, and 60% are happy with their company.

Nine of the top 10 engagement drivers involve the company and its senior leaders (i.e., organization).

Next, the study aimed to uncover the top 10 influencers of employee engagement: Which list items are deemed most important? What makes people go the extra mile? To determine this, researchers ran a correlation analysis against the list of 54 items and the four engagement items.

The results show that organizations—and the decisions executives make—have the biggest impact on engagement. 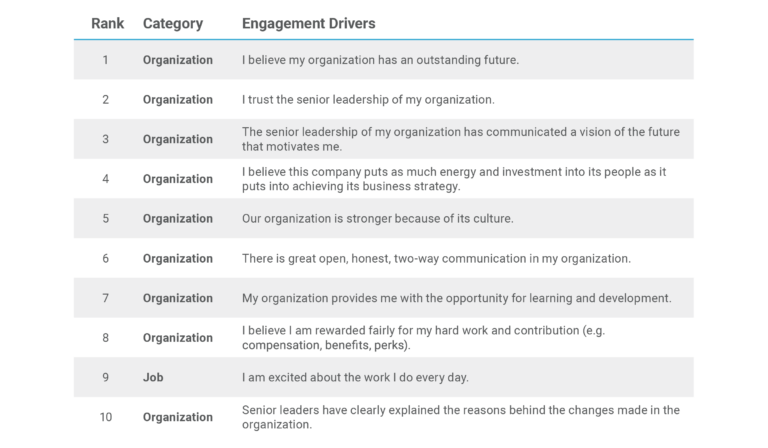 What causes people to quit

Nine of the top 10 drivers of turnover pertain to the organization—people leave bad companies.

Next the study sought to get to the root of what makes people want to quit their jobs. Was having a bad manager the primary culprit? Was it holding a job that’s a bad behavioral fit? To determine turnover intent (i.e., whether respondents had begun to consider working at a different company), researchers examined how they rated the following engagement item:

“It would take a lot to get me to leave my organization.”

Researchers then did another correlation analysis to identify the top 10 drivers of turnover intent—or what causes people to quit. As was the case with engagement, turnover intention is more about the company and its executive team than anything else.

As the data shows, whether people choose to stick around or leave depends on their faith in the company’s future, its C-Suite, and its people investment. 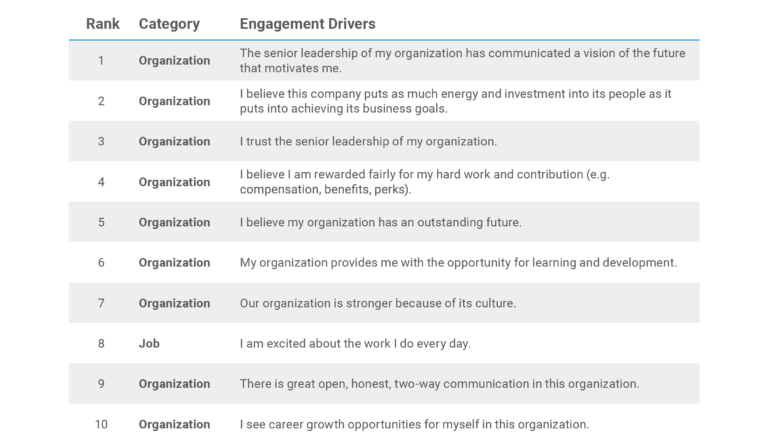 Other factors that determine engagement

While there’s no definitive connection between engagement and company size, employees at small companies feel more favorably about their jobs.

Does the size of an organization make a difference in how engaged its employees are?

Overall engagement numbers showed no clear upward or downward trend. None of the four categories showed a linear climb or drop based on company size either. That said, the job category saw the widest spread in engagement rates when comparing the smallest organization (74%) to the largest organization (64%). 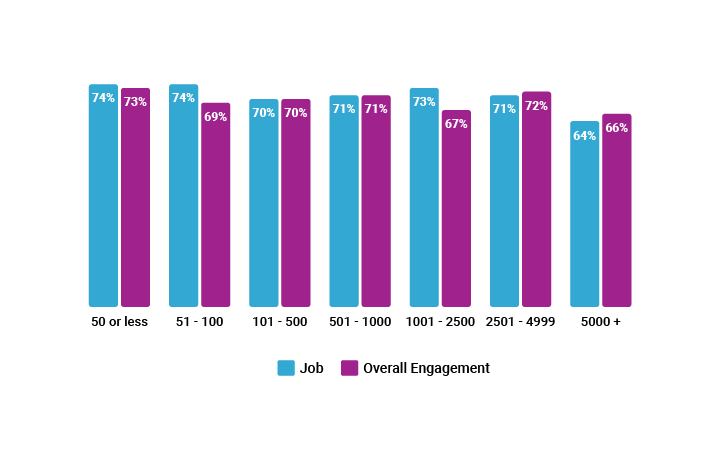 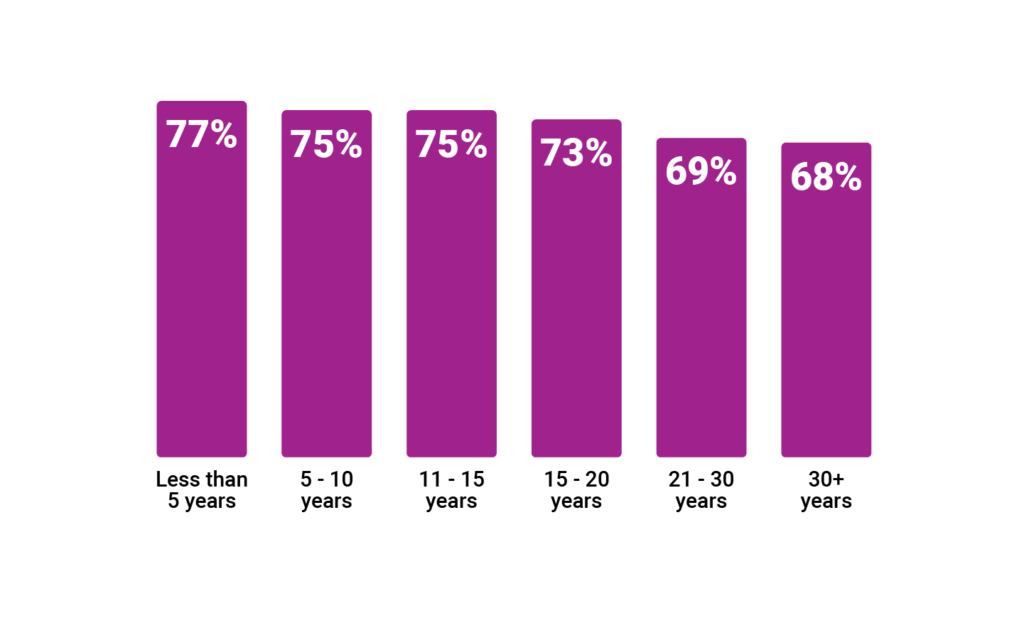 Is there a correlation between engagement levels and the age of a company?

If you use behavioral assessments to hire the right people, you’re likely to see better engagement scores.

The study also explored the relationship between behavioral assessments and employee engagement. To that end, respondents were asked whether they were assessed as part of the hiring process. 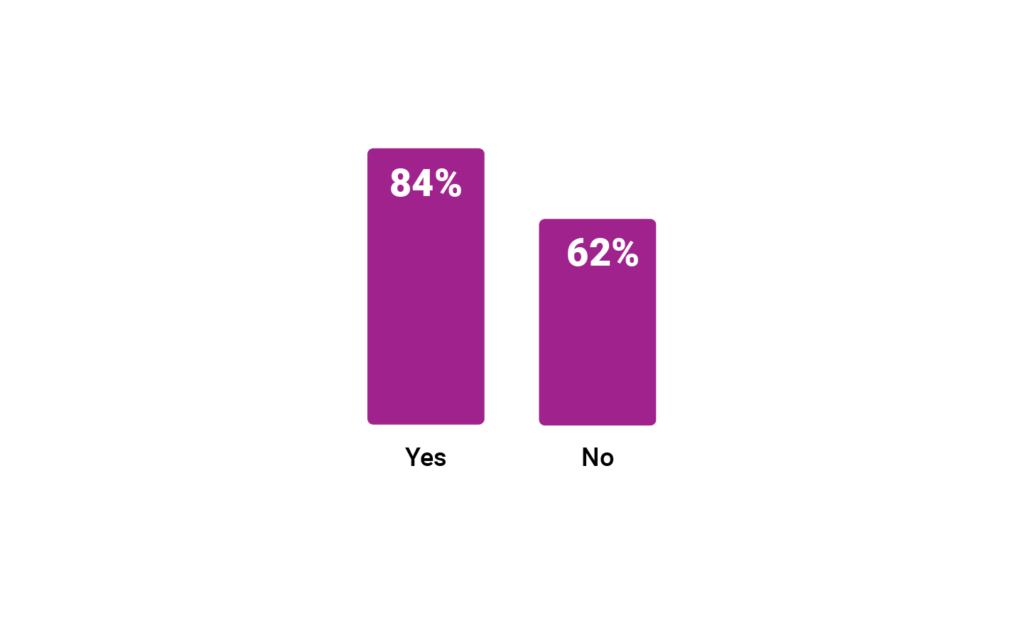 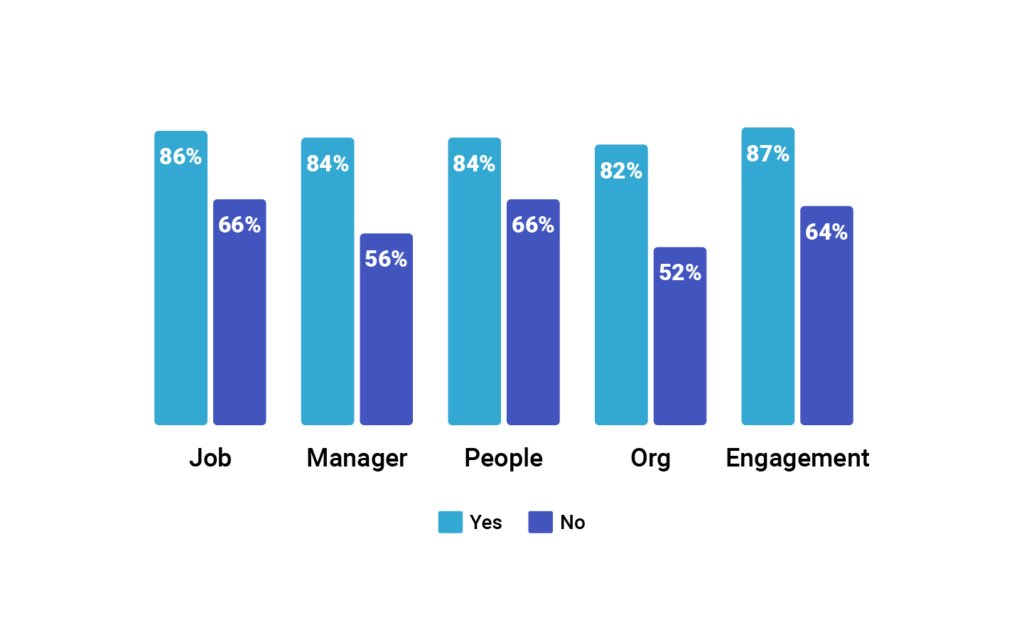 Employees who took behavioral assessments as part of the hiring process were asked whether they were given their results. Engagement levels of those who said yes and those who said no were compared.

Workforce assessments have multiple use cases—from ensuring job fit to building self-awareness. Either of these use cases could be the cause of increased engagement.

Assessments for team building and engagement

Companies that use assessments to improve team communication and collaboration see higher engagement rates than companies that don’t.

To examine the link between engagement and using behavioral assessments for team building, the panel was asked if their company uses assessments to improve teamwork.

Across the board, engagement is significantly higher among the people who work for companies that do use assessments as a means of improving team communication and collaboration. 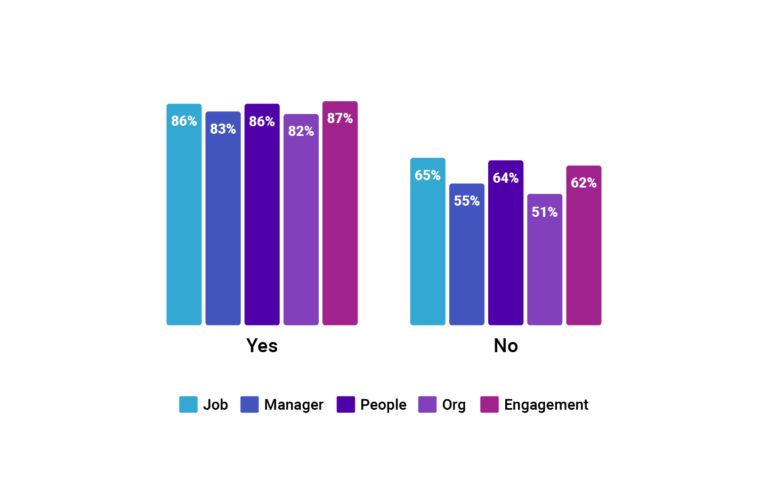 Companies that use cognitive assessments as part of the hiring process see higher engagement than companies that don’t. 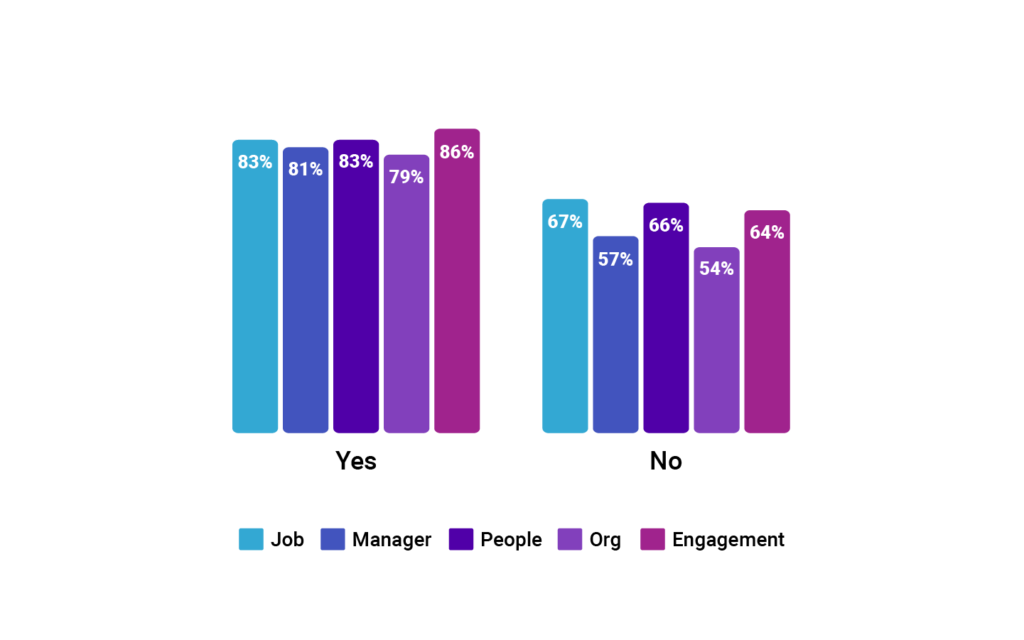 Top drivers of engagement in hospitality and food service

Ensure a highly engaged workforce by hiring the right behavioral fit; they’ll likely be excited to come to work every day.

One might expect to see a diversity of engagement drivers depending on the industry. However, the No. 1 driver of engagement pertained to the organization category in all but two of the 20 industries. The hospitality and food services industry was one of those two.

As you can see, the No. 1 engagement driver in hospitality and food services pertains to the job category: “I am excited about the work I do every day.” The remaining nine engagement drivers pertain to the organization and the people in it. 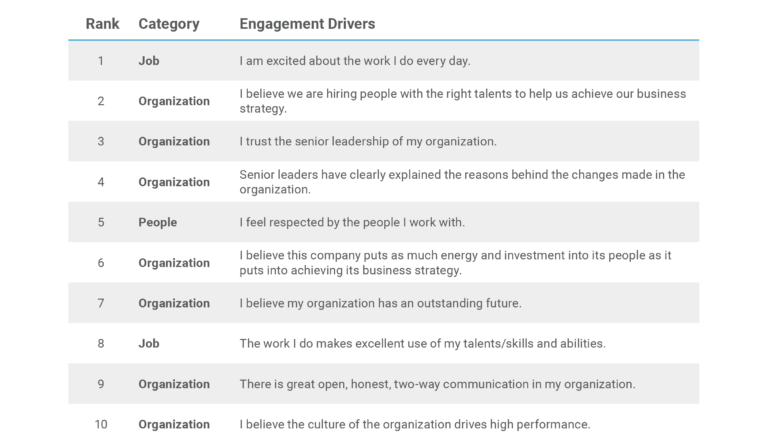 Top drivers of engagement in construction

If you’re a people manager in the construction industry, your actions have a major impact on the effort your employees put in; work hard and show integrity.

As mentioned, the No. 1 driver of engagement pertained to the organization in all but two industries. The construction industry was the second of the two.

For employees in the construction industry, having a great manager leads to higher engagement: “My manager works and manages with integrity.” As the data shows, the remaining top engagement drivers are split between manager and organization—with manager items composing 40% of the top 10. 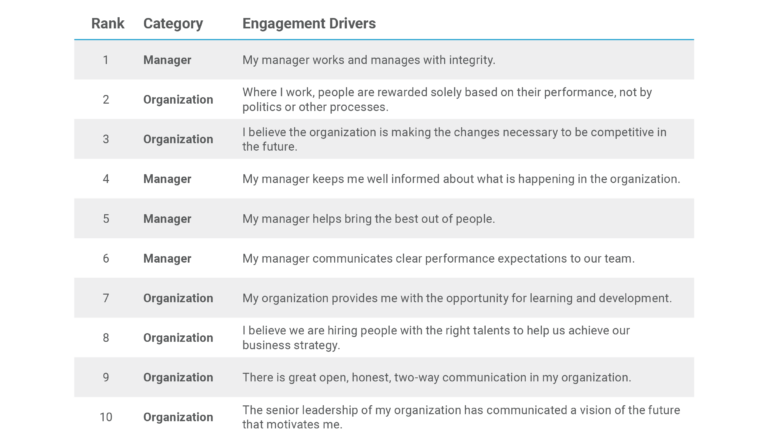 Top drivers of turnover in hospitality and food service 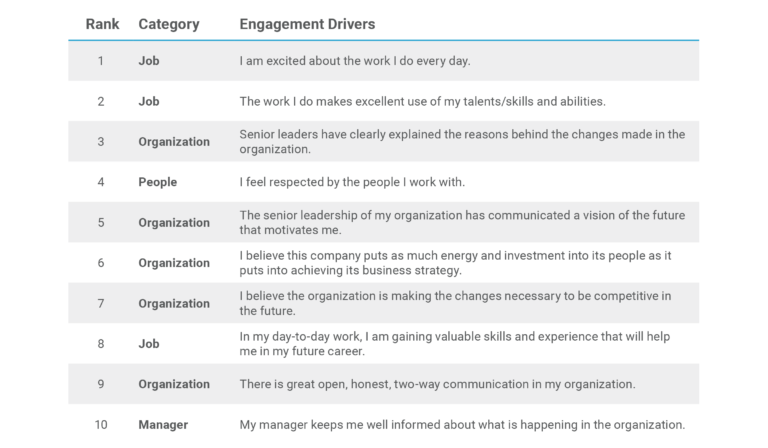 One might also expect to see diversity of turnover drivers depending on industry. However—like engagement—the No. 1 driver of turnover pertained to the organization in all but two of the cases. Hospitality and food services was one of the two.

As you can see, the No. 1 turnover driver in hospitality and food services pertains to the job category: “I am excited about the work I do every day.” (This is the same No. 1 engagement driver in this industry.) The remaining nine engagement drivers cover the organization, people, and manager categories.

Top drivers of turnover in transportation

Another unique industry-specific finding is that transportation employees make the decision to quit based on job fit. One-third of the turnover intention items pertain to the job category.

If people don’t feel excited about the work they do on a daily basis they’re likely to leave, so business leaders should take care to foster that excitement and find opportunities to make great use of individuals’ skills and abilities.

Also, employees in the transportation industry quit because of their co-workers. In fact, another third of the top turnover drivers relate to the people category.

Leaders in the transportation industry can reduce turnover by giving employees the tools and training to help them understand each other better. 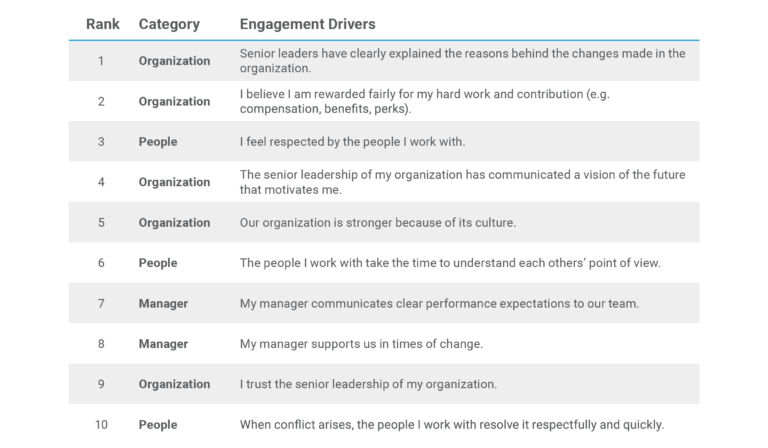 In February of 2019, The Predictive Index conducted a survey of executives, managers, and individual contributors across diverse industries. We secured respondents through market research firm Critical Mix (now part of Dynata).

PI started with a pool of 94 Likert scale items, asked on a 5-point strongly disagree to strongly agree scale. All questions were required, and a not applicable option was provided as an “out.” In an attempt to avoid survey fatigue, two versions of the survey were created—each contained about 65 items. Responses were collected over the course of two weeks in February 2019.

The following psychometric analyses were run:

Through those means, we collected 3,010 completed survey responses. Here’s some information about the respondent pool: 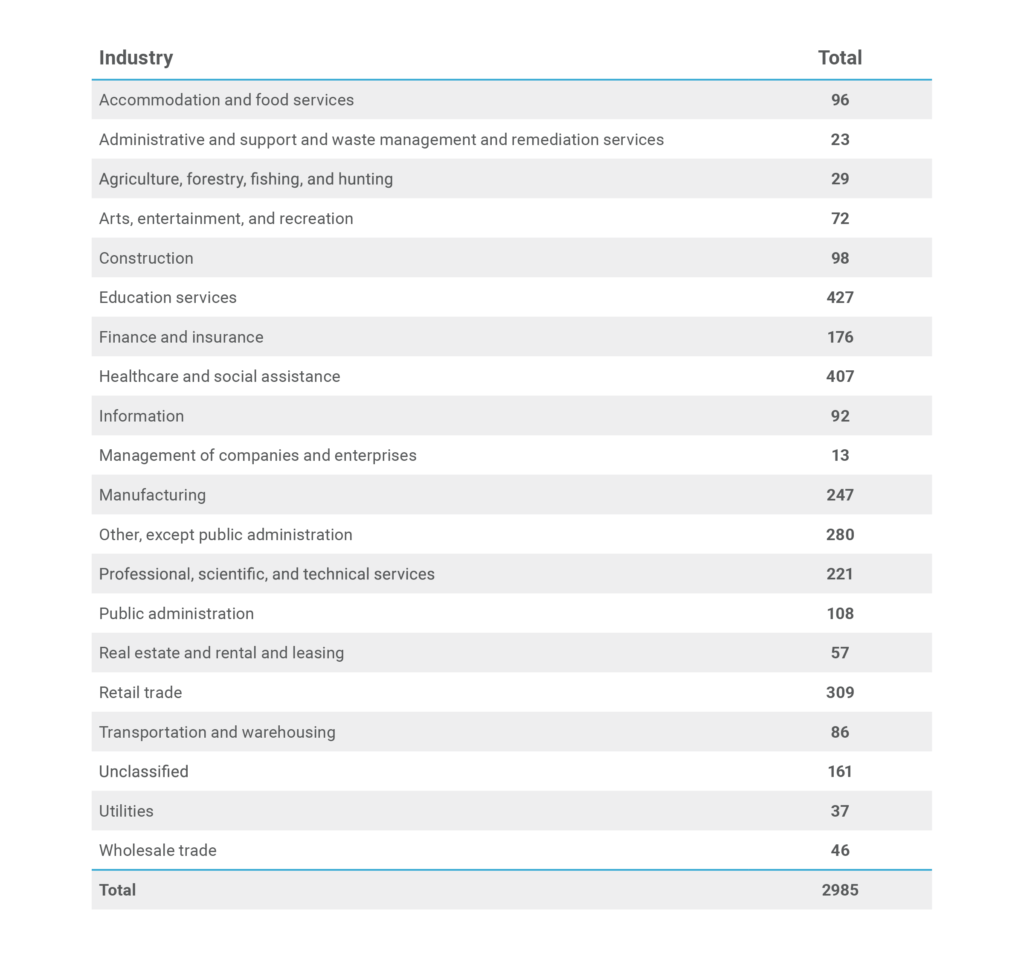 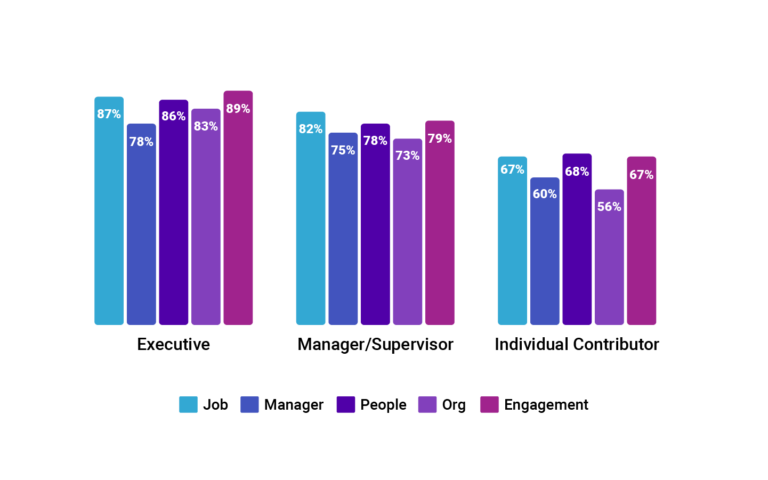