In January 2019, The Predictive Index® conducted an expansive survey of 156 CEOs. In the pages that follow, we’ll share not only some of the key data from that survey, but also stories, survival strategies, and tips in the “Mike Zani’s tales from the trenches” sections. Mike Zani is a former Olympic sailing coach, a Harvard Business School graduate, a three-time CEO, and the current CEO of The Predictive Index. 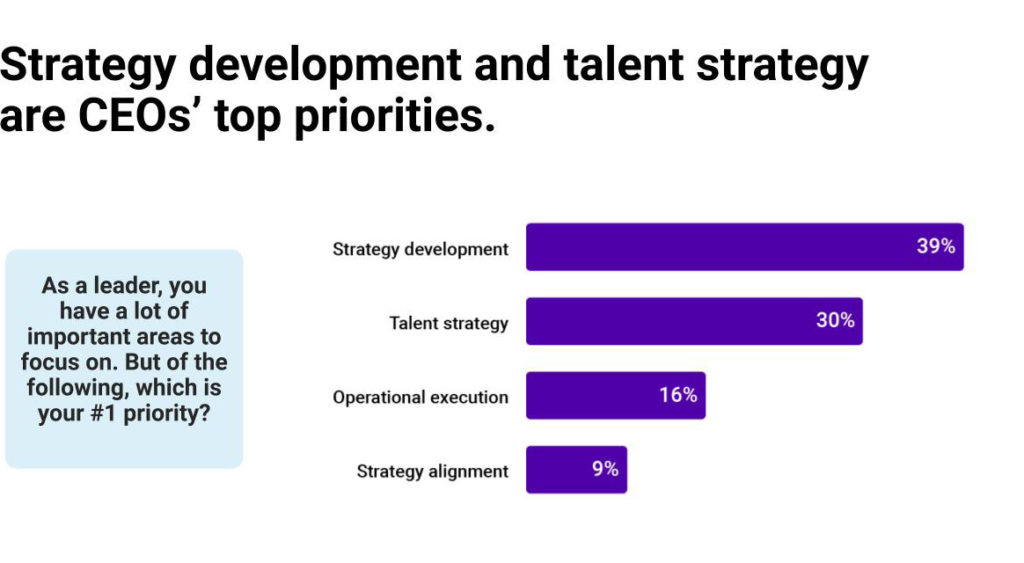 Survival strategy #1: Own it, but don’t own it alone.

“Early in my career, I used to unintentionally hide the strategy, as opposed to exposing it—especially when it was in development or flux. Once it finally got stable, I would trot it out to the team. When I trotted it out, I did so more formally and professionally, and then called it ‘done.’ Two months later, I’d be shocked when someone didn’t know the strategy.

I was the problem, not them. After 15 painful years, it’s so clear to me now that you need to be always talking about the strategy—no matter how much it might be in flux. Your team will battle test it, and build off it, improve it, and challenge it.

And then you need to talk about it—constantly. My friend, Mike McKee (CEO of ObserveIT), says that CEO stands for Chief Explainer Officer. He’s right. Part of my job is to explain the company strategy over and over again.

The strategy also needs to be simple enough and memorable enough that everybody gets it. In his book “Good to Great”, Jim Collins talks about the fable of the fox and the hedgehog. The fox knows many things, but the hedgehog knows one big thing. Collins says that all good-to-great leaders, it turns out, are hedgehogs. They know how to simplify a complex world into a single, organizing idea—the kind of basic principle that unifies, organizes, and guides all decisions.” 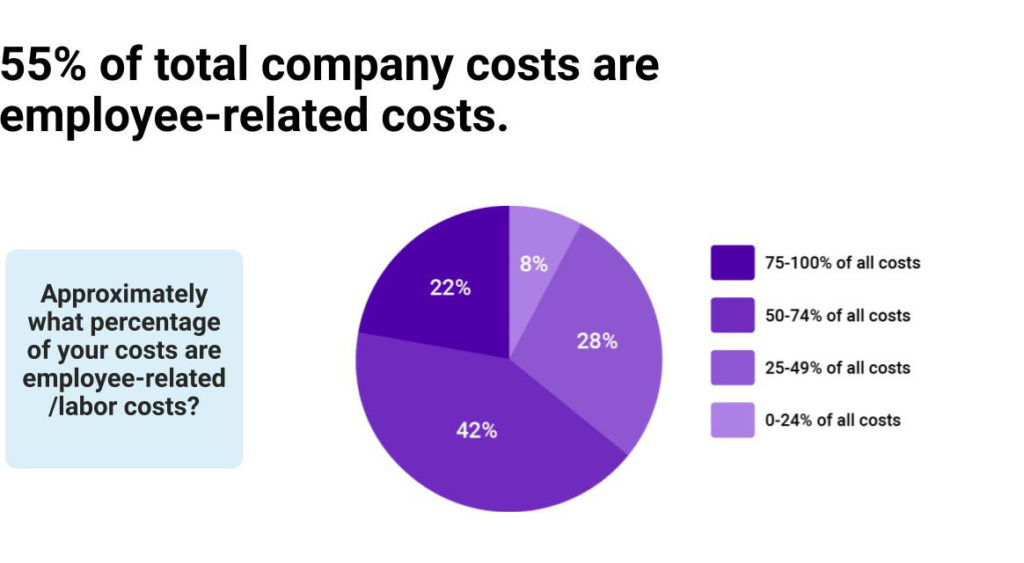 “Without a doubt, the CEO owns the corporate strategy. From there, the CFO should build a supporting financial plan. But so many companies completely miss the third leg of the stool: the people strategy. And, of course, it’s the people who make or break the whole thing.

When we bought The Predictive Index, we knew we were buying a stable, family-run business that had single-digit growth, and we planned to transform it into a 30% year-over-year growth company. To do that, we needed risk-tolerant people that could break things without regard to how to put them back together again. We had to be comfortable moving without all the data. We had to be nimble, entrepreneurial, and sometimes scrappy. Our very first hires were people with behavioral profiles that thrived in those environments. Of course, we use our own behavioral assessment all the time, and we were exceedingly conscientious about hiring people whose behavior profiles matched our strategy. If you make those early strategic hires, they’ll help set the cultural tone.” 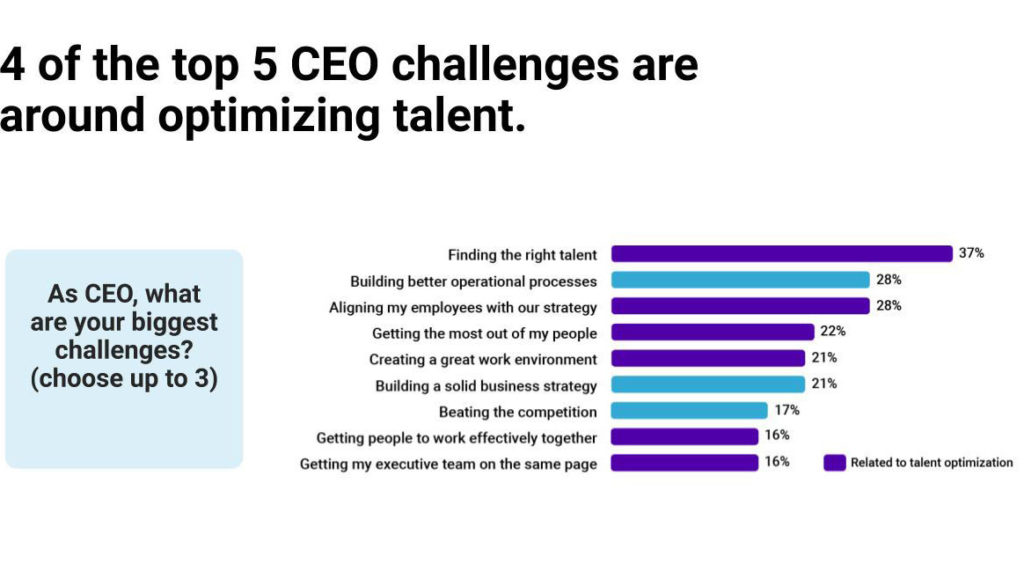 “First of all, I am always recruiting. I’ve tried to recruit people while checking out at Costco or getting help at the Apple store, because I observed people’s passion for customer service and sought that in my company. Great recruiting is often about seeing the person, not the resume.

Another important mindset to have is to think about recruiting for your bench—the people who might join your company two months or even two years from now.

By always recruiting, you’re sending a message to your entire company that they should always be recruiting as well. At The Predictive Index, about 30% of our new employees are internal referrals. The way we see it, those new employees are pre-vetted. When employee referrals come in the door, they’ve already been mildly indoctrinated with our culture and our values. There’s a culture here where everyone’s recruiting. We have people spend a lot of money on buying coffee for people to tell them about PI—and we encourage them to expense it.

Last note on recruiting: The only way you can be great at recruiting is to be a great place to work. It’s thrilling to me that we are number 22 on Glassdoor’s Best Places to Work list. There’s no hiding what it’s like to work for you. When it comes to your employer brand, you’re going to reap what you sow these days. So take a personal interest in your employees—and even your ex-employees. Care about them as people, even as they graduate from your organization.” 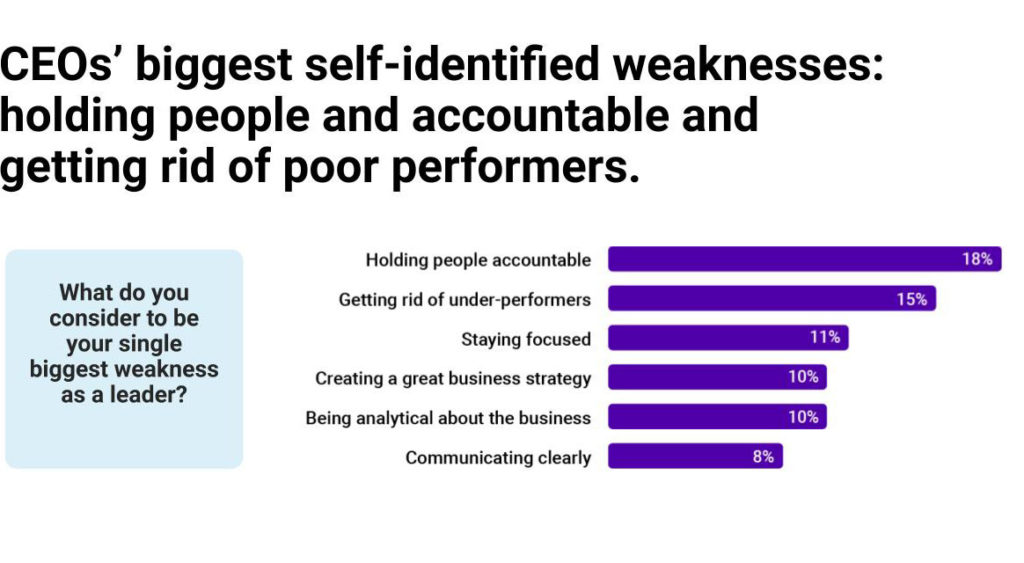 “It’s interesting that something as foundational to leadership as holding people accountable is what CEOs most frequently cite as their biggest weakness.

Here’s my take: You have to be the model of accountability. You have to do what you say you’re going to do. Furthermore, you need to do the little things—like show up to meetings on time, be respectful of other people, and not pull rank.

The next thing that’s really important here is clarity around scope and timeline. Don’t let people walk out of a meeting with generic marching orders, then be disappointed when they don’t deliver what you thought they were going to. You’ve got to be comfortable with statements like: ‘Steve, I want you to do X by the end of this week and Y by the end of this month.’

I’m also all about setting expectations right out of the gates. I literally had an employee start two days ago, and yesterday, I walked him through my expectations. I explained to him what success looks like to me, and I also explained to him what failure looks like. I gave him a sneak preview into what I’m sharing at our board of directors meeting next week, because I want him to know about the things I’m worried about enough that I’m sharing them with the board.” 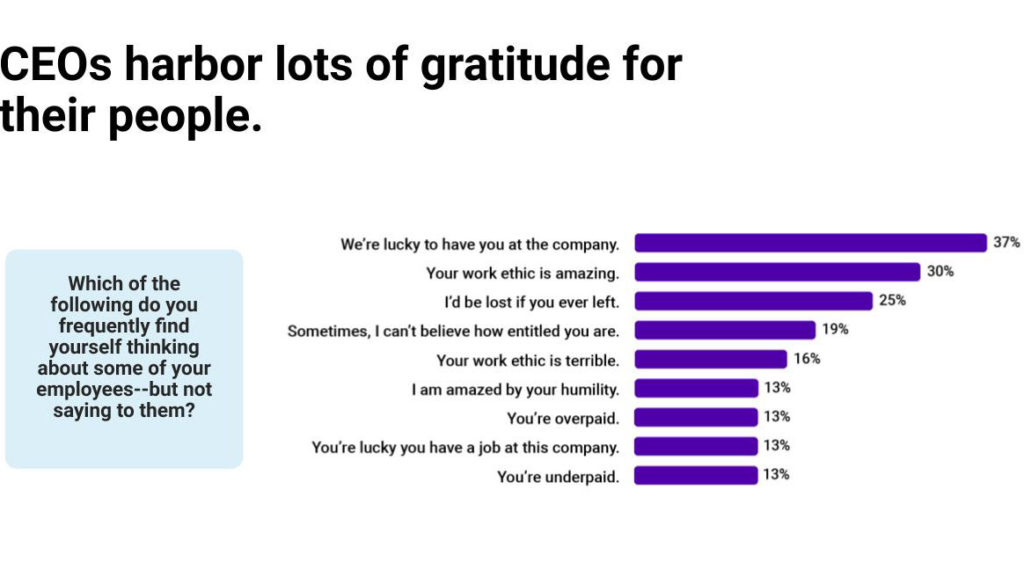 “I learned this lesson from the amazing Michael Allosso, who is a world-class coach to CEOs: Give positive real, positive feedback, not platitudes. Here’s what I mean by that: ‘Great job, John’ is fine and well, but it really doesn’t mean much. Use the TSP method: truthful, specific, and positive.

Example: ‘John, I was so impressed with that strategic plan you put together. You walked the line between including different perspectives and not getting bogged down in group decision paralysis brilliantly. You moved swiftly, but you were also thorough. Thank you for a job well done.’ This kind of feedback really paints a picture. It lets John—and anyone else who’s around to hear—what good looks like.

Another key thing about TSP feedback is you’re filling up people’s cup. You’re building them up, giving them confidence. They know that you have their back, so when the time comes to give them critical feedback, their instinct isn’t to defend themselves. They really want to own it. You’ve earned the right to give negative feedback, but you have to plant those seeds early. And, by the way, when you model this behavior, the other leaders in your company will start doing the same thing.

I think it’s also important to create systems and habits around positive feedback. For example, here at PI, we use a messaging platform called Slack. There’s a dedicated Slack channel where people recognize colleagues’ great work, and they always tie those acknowledgements to our core values. That channel is buzzing all the time, and it reinforces our great culture.” 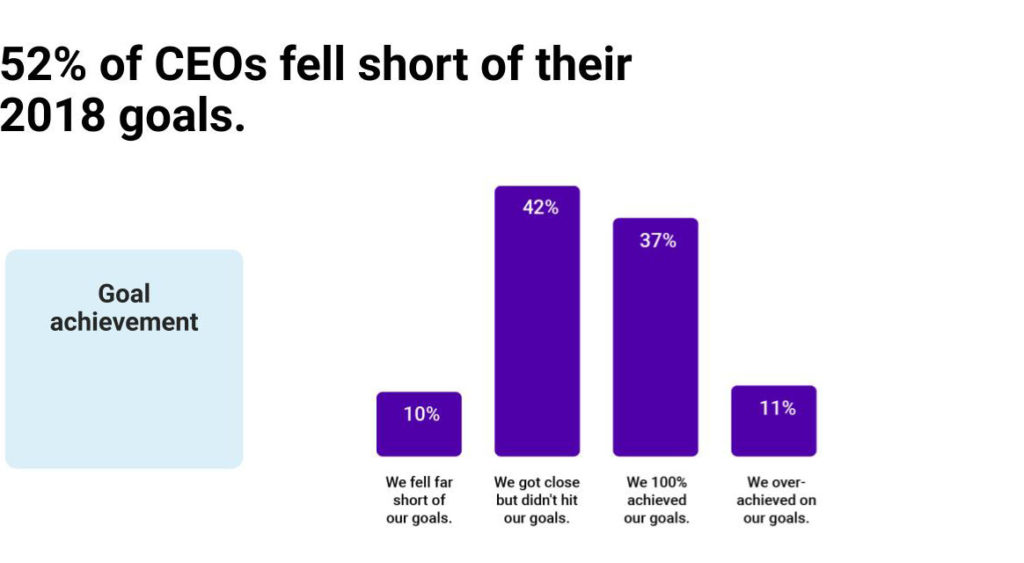 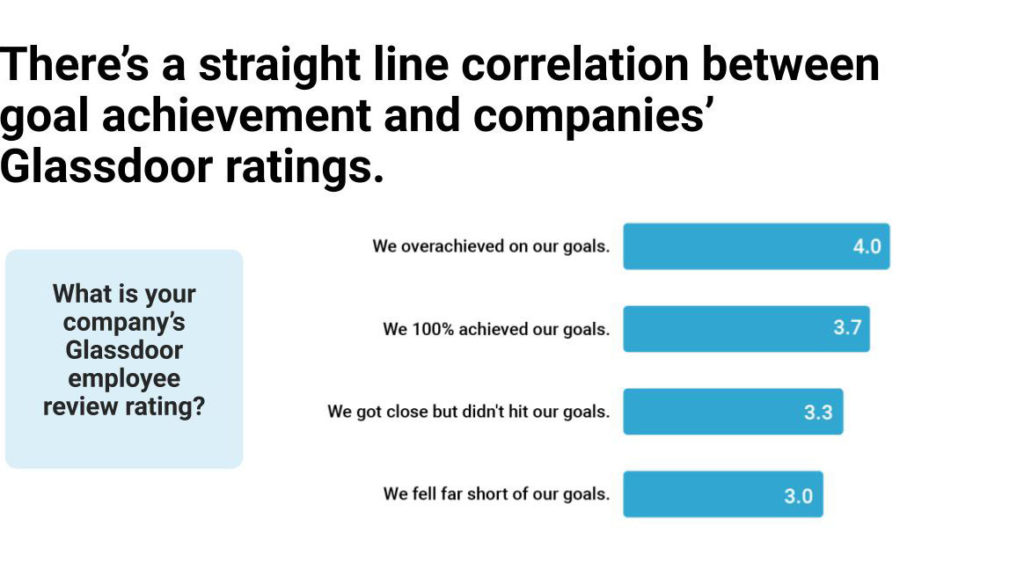 “The employee experience is so critical. It starts with caring personally. I make a huge point of knowing people on a personal level. I try to understand people’s life stories and their personal ambitions.

The next thing I’m really focused on is getting people bought into our mission. There’s a lot of talk about how millennials care a lot about the ‘why,’ and that’s true. But I’m not so sure it’s just a generational mindset difference. If you look at the workplace of 30 years ago, people stayed at companies for their entire careers. There was a lot of friction when it came to changing companies. Therefore, companies didn’t care so much about employees buying into their missions; employees were kind of locked in. But there’s less friction these days. The best people have their choice of companies to work for, so leaders have to differentiate by having a mission people can get excited about.

Another thing I focus on is personal development and training. One of the beautiful things about using behavioral and cognitive assessments during hiring is that you can hire people with ‘skinny resumes,’ because you’re hiring them based on predictive information about their potential and how they’re behaviorally hardwired. But that means you need to train them, and you need to help them grow. And when you help people with their personal development, it’s, well, personal. They build allegiance to you. With my direct reports, in one out of every four meetings, we talk about their personal development.” 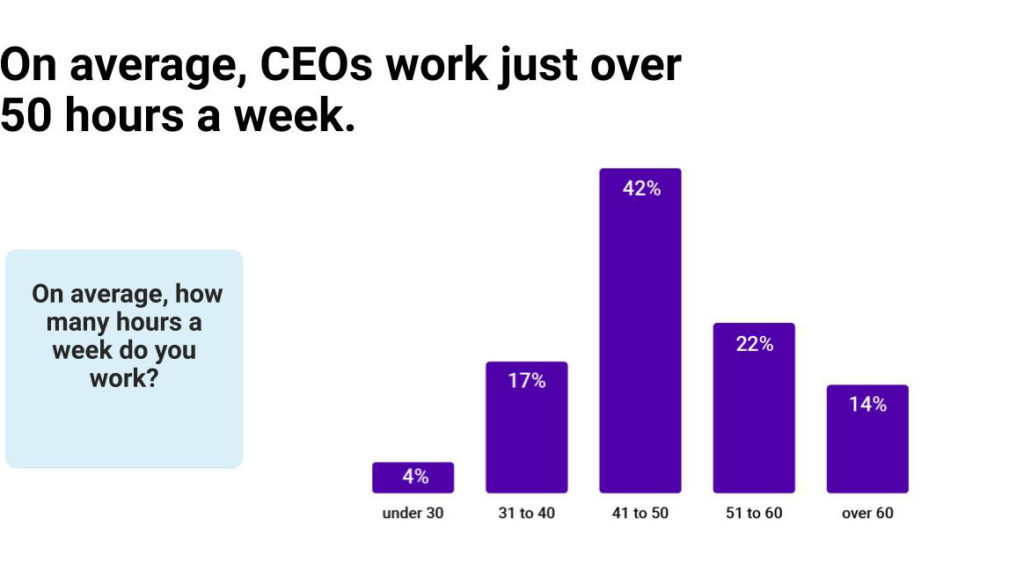 “I have a few personal stories to tell here. Both my wife, Conley, and I went to Harvard Business School. When we went to our five-year reunion, everyone was going on and on about how great their jobs were. At the 10-year reunion, everyone was going on and on about how wonderful their kids were. I figured I should get a jump-start on what people would be talking about at our 25-year reunion, so I asked one of the event organizers what to expect. She said that everyone talks about how they wish they’d spent more time on life and less time on work.

That’s part of the reason Conley and I took a year-long sabbatical, homeschooled our kids, and lived on a boat for a year.

I also try not to work on the weekends. I try not to email late at night. I end phone calls when I get to my driveway so I can be present when I get home.

Lastly, someone gave me a book a while back called “Shop Class as Soulcraft”, and it persuaded me to find and pursue a craft I really love. I spend a ton of time these days restoring old boats. My kids help me with it, and I find it gets me into that state of flow, which is tremendously cathartic.”